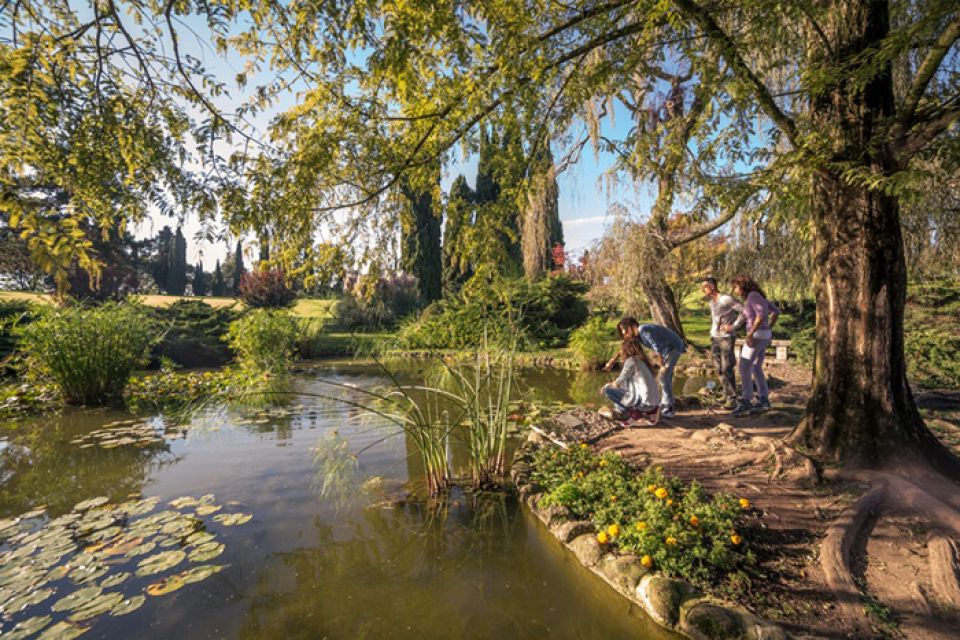 Agriturismo Dal Checco, situated in a district of Verona called Chievo, just a few kilometers from the centre of the city, offers numerous opportunities for recreation and sporting activities that can take up your free time in Verona.

THE SIGURTÀ FAMILY
Enchanting ecological complex born in 1407. It undergoes various improvements over the centuries up to the present day: in 1990, the Horizontal Meridiana was created, designed to have an expiry date of 26 000 years. In 2011, after six years of construction the Labyrinth was inaugurated, a path that winds over an area of 2500 square meters and which houses 1500 specimens of yew trees. In recent years there has also been an in-depth research on the blooming of tulips that colors the park in April. To this day, with its million bulbs, the flowering is considered the most important in Southern Europe. The love of the Sigurtà family towards the Park has allowed to reach important results such as the recent acknowledgments of “Parco più Bello d’Italia 2013” and “Secondo Parco più Bello d’Europa 2015”. Every year, from March to November, hundreds of thousands of tourists of different nationalities visit the Park.

The Parco Natura Viva is a modern Zoological Park. It was created thanks to the architect Alberto Avesani, the founder, who, in the 60’s, transformed part of his farm, existing since 1933, in a wildlife area, collecting animals of the local fauna to raise them and eventually show them to the public. Then the occasion to temporarily host the animals of a circus ensured the thought of creating a park, open to the public, to host both exotic and indigenous animals.
About 10 hectares, that corresponds with the current Wildlife path, was inaugurated in 1969. In 1973 a sector, called Safari, was added and dedicated to the species of mammals and African birds, in which the visitor stays in his vehicle. In 1978, it was expanded with new routes: the Aquaterrarium, the Tropical Greenhouse and the Dinosaur area, where visitors, for the first time in Italy, could admire life-sized models of reptiles from the past. Since 1985 an important project of general requalification of zoological, architectural and managerial type has been started.

Near the Agritourismo there is a long cycle path, called "cycle path of the sun" beside Adige river, surrounded by greenery and the neighbouring countryside.
Agriturismo dal Checco offers free bicycles.

There are long protected paths which take you to the city centre.

To help you better organize your walks, and your bike rides along the cycle paths of Verona, we recommend you consult the following link: LIST OF CYCLE PATHS

Near the Agritourismo, there are several restaurants where you can have lunch or dinner tasting typical Veronese dishes like boiled meat with Pearà, Pasta and Fasoi, Amarone Risotto, Frittole and many other specialities.

Where to go shopping: City centre, or towards Lake Garda

What to visit in Verona?

By clicking on the following titles, you will find further information concerning places and buildings of Verona mentioned above.
Places to see in Verona
Verona Guide

Centro Benessere Termale Aquaria – Terme di Sirmione
3500 square meters of sheltered area. 6500 square meters of parkland. 700 square meters of thermal water surface. Saunas with a view on the lake and hydromassages. Pools, effervescent beds, steam baths, sensory showers with water rich in mineral salts and micronutrients. Temperature always between 35 and 36°C that allows you to use the outdoor pools even in winter.

Aquardens – Terme di Verona
5000 square meters of pools and lagoons, caves and waterfalls, salso-bromo-iodic water that flows so pure at 47°C from a depth of 130 meters. 1500 square meters of wellness centre with beauty cabins and SPA. 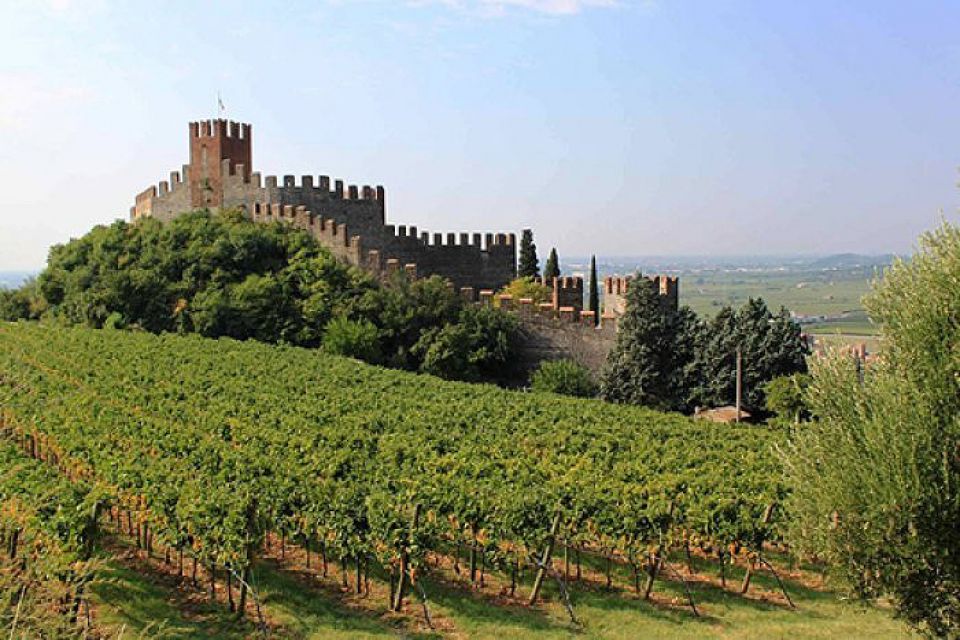 CUSTOZA
Custoza is known to have been the scene of two battles of the Risorgimento, which ended in both cases with the defeat of the Piedmontese army first, and next with the Italian one due to the Austrian Empire. Custoza is located approximately at equal distance from Sommacampagna, Valeggio and Villafranca. The town gives its name to a DOC wine, the white wine of Custoza.
It is recommended to visit it by bike…

VERONA
It’s the second largest city in Veneto by population after the capital, Venice. It is easily reachable by bike in just 15 minutes from our structure. The city of Verona, knows as the site of Romeo and Juliet tragedy has been declared as a UNESCO World Heritage Site for its urban structure and architecture: Verona is a city that has developed progressively and continuously for two thousand years, integrating top quality artistic elements of different periods; it also significantly represents the concept of a fortified city.

MANTOVA
Mantua is the capital of the homonymous province in Lombardy.
Since July 2008, the city of Lombard art, with Sabbioneta, both united by the heritage left to them by the Gonzaga Family, who has made these cities two of the main centres of the Italian and European Renaissance, has been included in the UNESCO World Heritage List. In 2016, the Ministry of Cultural Heritage and Activities and Tourism awarded Mantova the title of Italian Capital of Culture. In 2017 Mantova is part of the European Region of Gastronomy-Eastern Lombardy [11], together with the provinces of Bergamo, Brescia and Cremona.
Mantova will be the European City of Sport for 2019.
It is also the only city, intended as a widespread urban museum, you find it on the Google Arts & Culture platform, with more than 1,000 digitized works, 40 virtual exhibitions set up in 8 different virtual museums.  It is 45 km from Verona.

SANT’AMBROGIO DI VALPOLICELLA
Sant’Ambrogio is located 18 km northwest of Verona. It is part of the Valpolicella. It is located a few kilometers from Lake Garda; it also includes a small part of Vallagarina, on the border with the municipal territories of Rivoli Veronese and Dolcè, to protect the Chiusa of Ceraino. Throughout its length is crossed by the SS12 "Abetone Brennero" that connects Central Italy with the countries of Northern Europe, through the Brenner Pass (hence the name). Moreover, it is easily reachable via the A22 Brennero highway, exiting at the tollgate of Affi-Lago di Garda Sud or Verona Nord.

SAN FLORIANO – TERRITORIO DELLA VALPOLICELLA
Valpolicella is a territory with a multi-millennial past, whose signs are still visible and can become stages of a guided tour with the tour guides of Verona and Valpolicella. An example of these treasures of art and history is the splendid parish church of San Floriano, a marvelous example of Romanesque architecture. San Floriano is in the center of Valpolicella, in the territory of San Pietro in Cariano, one of the villages that make up the Valpolicella Classica.
The parish church is dedicated to Florian of Lorch, a Roman soldier stationed in Loriacum, today’s Lorch, in Austria and, like many of the first Christian martyrs, executed once discovered his belonging to the new religion that was spreading in the Roman Empire. San Floriano is a saint traditionally revered in Bavaria and Austria, and it is no coincidence therefore to see a parish dedicated to him in the Veronese territory, that has always been a place of exchange between the two sides of the Alps, at the end of the Val d'Adige, a natural line of communication with the Germanic world. Actually, according to some scholars of the area, the church was erected near a pagan temple dedicated to the goddess Flora. Not infrequently, with the spread of Christianity, churches were appropriating the areas occupied by places of worship of other religions. In this case the church may have also appropriated the name by changing it from Flora to Floriano. In the walls of San Floriano there are many tombstones and fragments of buildings dating back from the Roman era. Many scholars believe that where the church stands today, in Roman times there was probably a necropolis.
San Floriano is in an excellent position for a break along a tourist route together with the Valpolicella tourist guides. Maybe with an itinerary that combines history, art, architecture and the excellent wines of the area, first of all the Amarone.